A BURNABLE BOOK by BRUCE HOLSINGER 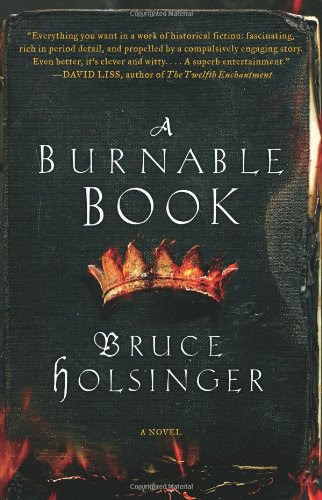 This will be a difficult book to review.  I couldn't begin to describe the plot as I kept getting lost in it, perhaps you can follow it better than me.  Having said that, it's a fascinating story set in London in 1385.  I knew some characters, King Richard II, John of Gaunt, and Geoffrey Chaucer among others.  Chaucer in fact is one of the main characters.  He is in charge of the custom house where wool is shipped out, one of the big exports for the nation.

Chaucer is a successful writer, and has just begun to play around with the stories and characters that will become The Canterbury Tales.  He and another poet, John Gower, are good friends.  They have long traded verses and critiqued each other's work.  The mystery centers around a book of prophecies that tell how 12 kings have died, followed by the prophecy of how Richard II will meet his end.  Did Chaucer write this book?  John Gower's son, a spy, is apparently behind the mystery of the book.  But then there is also a powerful Englishman raising an army in Italy with plans to return to London.

The author writes that his approach to this novel was influenced by his own son, who asked this medieval scholar if people then had forks.  Good question, one that agrees with my own philosophy of history.  The everyday life of common people is endlessly interesting to me, and that is exactly what you get in this book, in spades.  For instance, the smells of 14th century London are almost real as you read.  People didn't bathe, the streets are littered with manure, chamber pots emptied anywhere, clothing isn't changed nor the bedding. I felt like I needed to hold my nose while I read.

Another thing I love about the book is the characters.  Chapters are told from the point of view of various characters.  Even though the person isn't identified at the beginning of the chapter, it is pretty easy to figure out who it is.  I suppose this adds to the confusion but I thoroughly enjoyed following the various characters as they all searched for the mysterious book.

My only caveat really is that if you find earthy language and actions offensive, this isn't the book for you. Places are named without delicacy, many of the characters are, shall we say, in the sex trade, and even officials and religious figures speak frankly of what goes on.  I had trouble getting used to that but couldn't fault the author for using this language since it is all a part of giving us an honest look at everyday life.