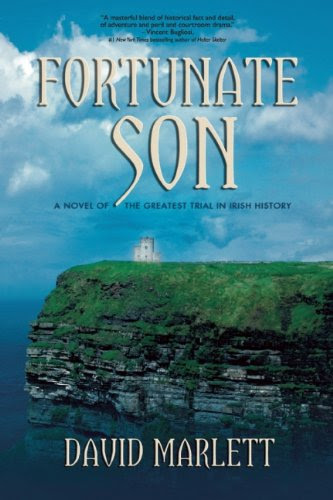 I'll be recommending this book far and wide to anyone who loves historical novels and characters who stay in the reader's mind long after the last page.  The subtitle says it is a novel of the greatest trial in Irish history, one that took place in 1743, but the majority of the book is about the life of a young man who was kidnapped and shipped to the colonies as an indentured servant.  His crime?  He was the heir to an earl but his amoral uncle was determined to have the title and estate whatever the price.

Robert Louis Stevenson was inspired by this story to write Kidnapped, which I now want to reread.  I imagine many other writers have been interested as well.  Author David Marlett is an attorney and historian so the narration of legal proceedings are wonderful, and shocking.  What a difference from today's courts! One particularly judge is so obviously biased as to be comical.  The descriptions of British jails are sickening. For instance, a prisoner in shackles tries to walk to a window for a breath of air and lice crackle beneath his feet.  The squeamish among us needn't worry though.  You'll be able to read this and enjoy it.

Since our hero, Jemmy Annesley, is in America for many years, we follow him through bad masters and good.  His impressions of a land so different from Ireland and sense of wonder at seeing Indians are a lovely break after his kidnapping and some horrible conditions aboard ship.  His love for characters who truly care for him and his struggle to overcome understandable anger make him quite sympathetic.  Of course the reader already cares about Jemmy because life has been so unfair and his father and uncle so cruel.  Yet he remains a man with a well-developed sense of fairness.

I've been impressed with books published by The Story Plant but this one is by far the best.