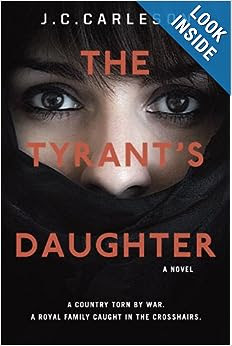 This is the first young adult novel I've read since I was one, bought by mistake since I thought it was for adults.  It's also an eBook, not what I prefer.  Having said that, though, this is an excellent book.

The narrator is 15 year old Laila, daughter of an assassinated dictator from an unnamed, probably Middle Eastern country in turmoil.  Thanks to a CIA agent, she has escaped to the U.S. with her mother and younger brother.  The two children didn't realize the political situation in their homeland, only that they loved their father but didn't like their uncle, a military man who was radically religious.  She learns the truth in bits and pieces through the story and so the reader learns along with her.

Her main problem at first is adjusting to an American high school and all of the customs in the U.S. that are so different for her.  She is also asked by her mother to make friends with Amir, a high school student from their country.  He, it turns out, is involved with the opposition and for very good reason.  Her adaptation to all of this is slow and halting.  A girlfriend named Emmy and a young admirer, Ian, are a big help but Laila is always drawn back to the comfort of her own customs.  I'm too removed from my teen years to know how well teens will relate to Laila or understand her dilemma but I'm guessing they would appreciate her story.

There is an afterward written by Dr. Cheryl Bernard of the Rand Corporation and president of Arch International that is well worth reading.  She was a friend of Benazir Bhutto's and has insights into the problems of politics, family, and human rights in the Middle East gained during her time as a CIA agent.  I found this to be educational about the problems of such political families.

Recommended
Source:  purchased
Posted by Barbara at 8:10 AM