THE ASTOR ORPHAN, A MEMOIR by ALEXANDRA ALDRICH 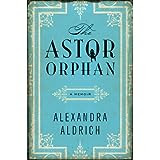 I bought this memoir thinking I would learn something about the descendants of John Jacob Astor and I did but not in the way I expected.  This is the poor, bohemian offspring of the Astor orphans, William Backhouse Astor, Sr.'s eleven grandchildren who were orphaned when their parents died of pneumonia within a short time of each other.  They were raised by family in the enormous mansion called Rokeby in the Catskills.  The author's great grandmother bought out her siblings to be sole owner of Rokeby, but after she died in 1963 the place began to deteriorate.  Eventually the estate of some 400+ acres was co-owned by brothers Harry and Ted Aldrich.  Ted's only child Alexandra is the author of this memoir.

Since Harry had a job as a civil servant in Albany, Ted ran the estate and rented out cottages and other outbuildings.  He also supposedly kept the place in good repair.  Actually he rented to various oddball friends and artists who drove staid Harry and his wife up the wall.  They lived in the main part of the mansion while Ted and his wife and daughter were relegated to the servants quarters and attics of the house. Alexandra's father, classically educated but a born mechanic and farmhand, didn't like to bathe, her mother didn't know how to keep house and, what's more, didn't care to learn, and they usually had to borrow money to buy groceries.  Alexandra was largely unsupervised, a free spirit at home in the woods and with the artists who lived in the creamery.

Alexandra was also a good student devoted to playing the violin.  She had two younger cousins to play with; they staged plays in the best rooms wearing gowns found in trunks.  Youngest Maggie would lie on a couch dramatically announcing that she was dying of "ammonia."  As young children they seemed to live a kind of charmed life, but as Alexandra grew near her teens she needed more guidance than her parents and her alcoholic grandmother could give her.  She became ashamed of her clothing and her life, was bullied relentlessly by cruel "in" girls, and her grades suffered accordingly.

At 14 she was shipped off to a private school, relieved at having escaped Rokeby but sad that she was leaving her now-sober grandmother alone and sad, and her parents to bicker endlessly to no purpose.  The story of these people and other family, the estate, and the escapades of the strange friends Ted attracted is at times sad, at other times hilarious, but always made me thankful I came from more ordinary folks.  You'll want to cry for Alexandra as she is bullied and humiliated.  On the other hand, you'll be angry at the way her parents neglected her so much she had to get her drunken grandmother to drive her to her violin recital.

Rokeby itself sounds like a shell of its former glory, like her Uncle Harry putting on airs and reminding everyone of his family background while struggling to keep up financially.  Such is the fate of the 450 acres granted to Robert Livingston, Sr. by King James II in the 1680s and passed to the Astors when they married into the Livingston family, then on to the Aldrich family.  From such famous history, decrepit in the 1960s.

Recommended only for fans of memoirs
Source:  purchased from amazon.com
Posted by Barbara at 11:28 AM