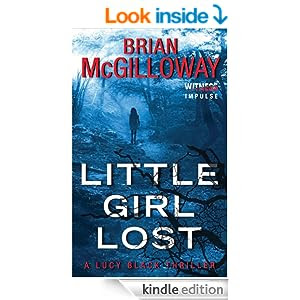 I'm reading eBooks again so I apologize to my followers who don't read them.  Sometimes the book looks too good to hold out for the paperback edition.  That's the case here too.

I was caught up in the story immediately.  It's set in northern Ireland, in and around Derry.  A milk truck gets stuck in the snow and as the driver is looking over the situation, he sees a little girl in pajamas at the edge of the nearby woods.  When he tries to approach her though, she runs back into the woods.  He can't imagine why she would be there in the cold, so he calls for help.  The police have been looking for a missing girl.  Is it her?  Lucy Black gets the call.

When they get the little girl to the hospital, she won't speak.  She isn't the missing girl nor has anyone called to say this girl is lost.  Meanwhile, her pj top has been sprayed with blood and luminol shows that her hands had been covered with it.  She is unhurt, but every time she falls asleep she awakes screaming.

Meanwhile, Black has terrible problems at home with her father, a retired cop.  She loves him and lives with him to care for him, but unfortunately he has Alzheimer's disease and has reached the point where she'll have to put him in a home.  He wanders away from the house and he's becoming violent.

The story is a little hard to follow.  There are so many characters involved in the two children's lives, and pieces of the puzzle go all the way back to The Troubles.  As they search for one child and try to find the identity of the girl in pajamas, Black finds a third little girl in a house of horrors.  This one cares for her baby brother while mom gets high on drugs with boyfriend.  So many children in harm's way . . .  Lucy Black is very emotional coping with it all.

It's a great story with well-drawn characters, sad but satisfactory in that you understand why everything is happening.